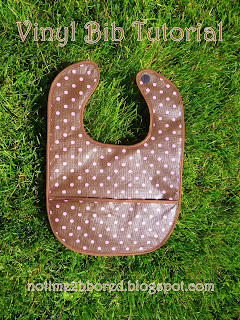 I noticed that the bibs we were using for our youngest had started to look kind of gross.
So I was planning on getting some new ones. But then, this weekend, I happened to run into this really cute vinyl material.
It's probably meant to be used as a tablecloth, but I thought I'd give it a try and use it for a bib.

And I am pretty happy with the result, so I wrote this tutorial.

It's pretty simple, and you don't need a lot of supplies, which is my favorite kind of project.
In fact, you might already have the vinyl on hand. You could just use an old tablecloth. The material that I used had a soft-feeling backing, and the front had a little texture to it. 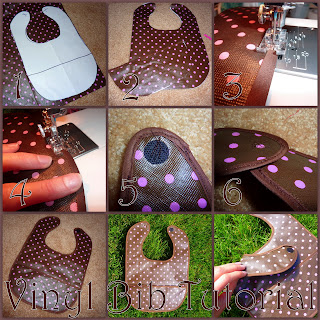 Supplies
Step by step tutorial
(the numbers refer to the numbers in the picture above.)

1. Take a bib and trace it onto paper. Mark on the sides where the pocket starts.

2. Cut out the bib and the pocket - twice.
(Make sure you do this precisely, it is easier to put the bias tape over the edges if it matches exactly.)

3. Stack the pocket pieces together, with the wrong sides facing each other, so both right sides outside. Put a strip of bias tape around the top edge (the straight edge). I used clear tape to make it stay in place. Then sew the bias tape in place, using a straight stitch, length 3. (For vinyl you don't want the stitch to be too short, since it might rip the vinyl.)

4. Now that the pocket is made, put the bib part together, wrong sides facing again. Put the pocket on top of it and attach with clear tape so that it is in the right place. Then, fold the bias tape around the edge. I like to start somewhere on the top of the bib, where the velcro will be. Sew the bias tape in place with a straight stitch, length 3, working the bias tape around the bib as you go. For me it worked best to go really slow. Try to stay away as far from the edge of the bib as possible while staying on the bias tape, this to prevent ripping later. Keep going till you are getting close to where you started. Cut of the bias tape, and finish off.

5. Attach the velcro pieces to the top ends of the bib.

The cool thing about this bib is that you can turn the pocket inside out, because the 'back' is made of the same material. If you use it like that, the pocket will stay open, and 'catch' food much better. I always like bibs that have that option!
I linked up to:

I love this idea, on a larger scale. My stepfather had a stroke and when he eats he has a hard time closing the right side of his mouth. He does pretty well but he drops food at almost every meal. I think I want to try to make something like this for him out of a "manly" fabric... Thanks for these instructions!!!

Just a quick note to let you know that a link to this post will be placed on CraftCrave today [01 Jul 12:00pm GMT]. Thanks, Maria

Oh, good idea. I just made a couple of toiletry bags out of this awesome vinyl laminate I found, for my dd and her friend, but now I have this whole chunk left over, that I am not sure what to do with! I know a few moms around that would appreciate this, though. :D

Love this idea! I have been crafting for a friends upcoming shower. I may have to make her a few of these! Vinyl bibs were always my favorite to use.

Cute. L'm at the other end of our
life cycle, making bibs for grandma. She wants something colorful, won't she be surprised when I show up with a few of these?

I like the idea of the material you used. Although I would prefer a snap instead of a velcro just so the baby won't be able to pull it off easily.

Welcome to my blog!

Mariska
I am the proud mom of 3 little girls. I love to craft, and am always trying new things. My kids like to craft as well, so I also like to do kids crafts with them! We're always busy doing something, so therefore the name of my blog :) Look around and I hope you like what you see! I love to hear from you!

My shop: patterns and tutorials - Now available as Instant Download!